Why Dr. Thomajan Has Been a Member for 8 Years

In the 10 years since Top Practices first started, we've seen many changes in technology, society, and the expectations and pressures of the medical world. In all that time, though, some things don't change—including some of our most successful members. As a part of our 10th Anniversary Celebration, we're highlighting some of our amazing, long-term members who've done incredible things and seen fantastic growth in their practices. One such member is Dr. Craig Thomajan of Austin Foot and Ankle Specialists.

Dr. Thomajan began in private practice back in 2005, as a doctor fresh out of residency and looking to build from the ground-up in Austin. Without a facility at first, he established himself through house calls and treating patients in local assisted living and nursing homes. He used this initial source of revenue and the connections he fostered to be able to open the 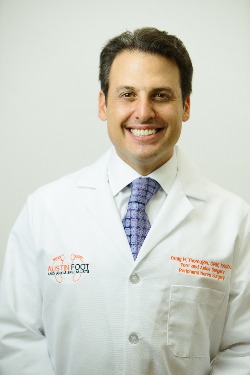 actual doors of his practice in March of 2006.

By 2009, Dr. Thomajan was happy with the trajectory of his practice, seeing more and more patients and making more money. However, as he was looking forward toward growth and where he felt his practice should grow, he realized he needed something more:

“The goal of the practice and one of the tenets from the purpose of your practice is for the emotional and financial security of your family. And what I was finding was that, in order for me to really achieve that goal, the practice really had to be bigger than just me. So how do you create an environment where you can be profitable and still have a life-work balance, and not do it all yourself?”

That year Dr. Thomajan met Rem Jackson and heard about Top Practices at an AAPPM meeting. The message about marketing and its potential for growing a podiatry practice was just what he needed to hear. He realized this was his way to achieve the kind of practice he had originally envisioned for himself. He joined Top Practices and began implementing marketing strategies immediately.

The results were impressive. “Initially and provisionally we experienced exponential growth. Within the first two years of implementing and adopting the marketing tenents, the practice experienced triple-digit growth. After that plateaued, I'm happy to report [we've had] continued double-digit growth year over year.”

Eight years is a long time to commit to being a member, but Dr. Thomajan enjoys the camaraderie and idea-sharing that are hallmarks of the Mastermind group, as well as how Top Practices makes it possible for him and his practice to continue growing and pushing the bar.

“Doing something or doing nothing, to me, is not a choice. So you always have to do something. And you have to be consistent and persistent throughout your strategy for it to be successful. You know...it's a Slight Edge approach. If you're continuing to do the things you're supposed to do and you're continuing to see the results that you want, then why would you ever stop doing that thing? I think... there is always something else to do. And Top Practices has really made it easy to continue to move the needle because it's a moving target. Because the environment's changing, and we have to change with it.”

We're overjoyed with Dr. Craig Thomajan's successes and the incredible growth in his practice. We love the insight he brings to the Mastermind group and look forward to the next level he and his team are able to achieve in the coming years.

If you're a podiatrist and you want more for your practice than to just get by, know you're not alone—and you can make a change. You can be relatively new to the career like Dr. Thomajan was, or a many-year veteran. At Top Practices, we can help you achieve the results you want so you get the practice you're looking for. It's never too early or too late to start! Hundreds of podiatrists all over North America and even in Australia have done just that, and seen incredible results. Contact us today for more information, or to join the Mastermind group and get started.